As more states legalize cannabis, the faster the industry is growing and developing. This means a greater need for security solutions to protect and deter crime and unwanted behaviors at and around retail dispensaries, wholesale distributors and cannabis-specific farms. The following compilation of videos shows the havoc trespassers could bring to a cannabis-related property if live video monitoring isn’t part of its security strategy.

Just days after new inventory had arrived at a cannabis facility, a trained Stealth security monitoring operator watched as five individuals squeezed through a space where perimeter fencing and the edge of a building meet. One of the trespassers appeared to be carrying a bolt cutter while it looked as if another held a large-gas-powered saw. Our operator contacted police.

After hemming and hawing at the back of the facility for a bit, three of the individuals walked out of camera view. The two remaining began to follow, but quickly turned and ran the other way. The other three came back into camera view and were running. All five ran back toward their point of access and exited the same way in which they had breached it.

One of our observant security operators spotted some individuals climbing an industrial ladder attached to the side of a cannabis business. Our operator contacted police.

In the meantime, the operator accessed another on-premises video surveillance camera that pointed toward the front door of the cannabis business. Red and blue flashing lights reflected off the glass windows and metal framing of the door, indicating that police had arrived on scene.

Switching to the other camera, the operator saw an officer who appeared to speak with an individual on a bicycle while other officers searched the premises.

Our operator reported that after a chase, police arrested the individuals.

A Stealth monitoring operator – trained to determine what suspicious behavior looks like as displayed on a video surveillance camera – noticed a male with a baseball cap meandering around a cannabis facility during daylight hours. The operator sounded the on-site speaker warning. The trespasser ignored the warning and continued to roam. The operator contacted local police.

From small retail dispensaries to multi-store companies, to wholesale distributors and farmers, video surveillance is a critical element that should be a major part of their security strategy. Two elements of this strategy are compliance and security/safety.

In response to the growth of the cannabis industry, local and state governments in the United States and Canadian Provinces are creating and implementing regulations that cannabis businesses must abide by to stay compliant. In the U.S., for example, security systems should operate 24 hours, seven days a week, with video data retention periods of 15 to 90 days. This is in addition to other regulations being passed that deal with camera placement and resolution – and this is just the compliance part.

Bad actors know that the cannabis industry is not only cash heavy, but the products are extremely valuable. This makes break-ins and theft very appealing. This is also where the security and safety part of the strategy comes into play. Video surveillance in tandem with live video monitoring works in real time. Suspicious events are captured as they happen and are converted into saved data. At the same time, trained security operators watch the event and respond accordingly to help stop and/or deter unwanted activity.

A custom-designed Stealth security solution could help keep your investments and assets safe and compliant with local and state regulations. Our video analytics combined with human intelligence by our live video monitoring operators offers a proactive approach to security. On the back end, our video archiving solution captures and saves all video data for the proper amount of time. This data can be sorted by our world-class experts who will research, edit and send the exact piece of video data needed along with a detailed report. Stealth’s approach to cannabis security is often more cost-effective than traditional security solutions and methods, so our customers typically receive a savings of 25% to 60%.

Contact us
to examine how Stealth can help your cannabis business stay safe and secure while maintaining compliance with requirements with a customized solution. 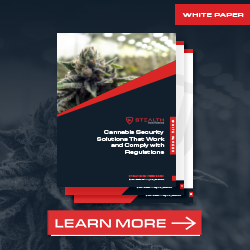 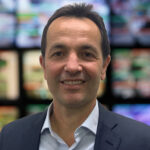 What Should a Construction Site Security Plan Contain?

How Can I Help Prevent Crime in Parking Structures?