One Solution Can Help Solve Your Construction Site Security Issues

Has Any of This Ever Happened at Your Site?

Making sure your construction site is safe and secure is important to the success of your project. In all likelihood, there will be valuable equipment and materials that are susceptible to theft left out in the open. Even if items are locked, they can still be stolen. Liability from trespassers getting hurt on your site, as well as from worker injuries, can plague your bottom line. Perhaps one of the most damaging threats to a construction site is fire, which can demolish an entire project.

At any given time, there are a multitude of tools and expensive equipment on a construction site, most of which cannot be locked safely away. According to the National Crime Information Bureau (NCIB), up to $1 billion a year is lost in the U.S. because of equipment theft. Insurance may or may not cover the loss, but there may still be time and money lost in work stoppages and missed deadlines waiting for replacements.

In the video above, a trespasser sneaks into a construction site attempting to steal copper. We were watching and called police, who quickly arrived to make an arrest.

In some cases, intruders aren’t looking to steal anything. They just want to vandalize the site. This also comes with its own costs.

Fires at construction sites are a real threat. Cigarettes, sparks from tools, and electrical issues can cause catastrophic damage in a short period of time. The biggest fires in 2014 happened at properties under construction, according to the U.S. National Fire Protection Association. Part of the reason is that many of the detection and protection features that help control fires, like sprinkler systems, haven’t been installed yet.

As you saw in the video, Stealth spotted a fire break out on a construction site after everyone had left. We called the fire department who arrived minutes later. They extinguished the flames before any extensive damage occurred.

Accidents happen on construction sites all the time. According to the United States Bureau of Labor Statistics, one in ten construction workers is injured every year. OSHA reports out of nearly 5,000 worker fatalities in the private industry in 2017, just under 21% were in construction. If you’re doing the math, one in five worker deaths that year were in construction. In the video, a worker loses his balance and falls off the ladder while he’s working.

Injuries don’t just happen to workers. Trespassers and visitors who are unfamiliar with the property can easily be hurt. People just passing by can also become injured. Take a look at the couple in the video casually walking by a construction site. Notice one of them is hit with falling plywood. Recorded video footage can be used as evidence in liability cases. Even if an unauthorized person gets injured on a construction site, the project manager or property owner can still be liable.

Live video monitoring is a cost-effective security solution that can help construction sites guard against all these issues. It’s more effective and less expensive than security guards. They can be costly and have limited ability to watch an entire site.

Live video monitoring works in real time to catch events as they happen. Using a combination of technology and human intelligence, this proactive solution can monitor the entire site to help prevent incidents before they happen, while saving you up to 60% on security when compared to guards. Trained security operators can activate speakers at unwanted trespassers and call police or other first responders if the situation warrants. As you saw in the video, this solution can be very successful.

In addition to live video monitoring, our solution includes 24-hour video recording. So, even during times when your site isn’t being watched in real time, incidents will still be recorded. Footage can be used later as evidence in liability cases and insurance claims.

Security for a construction site is just as important as with any other type of commercial property. Theft, vandalism, fire and liability are all hazards that can have devastating consequences. To learn more about our proactive construction security solutions, contact us. 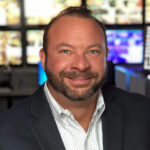 How to Protect Your Construction Trucks to Keep Them Safe