From coast to coast, shopping centers are popular locations with unique spaces for criminals looking to burglarize, vandalize or loiter. The following video shows how criminals attempted to gain access into five retail establishments within the shopping center environment – each with their own exclusive layouts – in Texas, Florida, New York, Washington, DC and Arkansas. Using live video surveillance and monitoring as a means to help deter and/or reduce undesired behaviors.

Our operator continued to watch the event. Moments later, many exited the store with merchandise in-hand. One after another, the thieves scattered. Some fled to the sidewalk of a busy street.

A police cruiser arrived on scene and two officers entered the breached store. At the same time, the thieves were seen on the sidewalk of the busy street shoving items through vehicle windows and fleeing the scene on foot or getting into the passer-by vehicles. Another police cruiser arrived to manage the street side of the retail theft in action.

One individual was taken into custody.

An individual sauntering across the empty parking lot of a shopping center was observed by a trained Stealth operator. The individual approached several of the retail stores’ doors in the center and tried to gain access. Our operator sounded the on-site, audible speaker warning, but it was not effective in deterring the trespasser. He forced his way inside a retail store through the storefront window.

Our operator contacted police. Shortly thereafter, two police cruisers arrived onsite. Two officers located the trespasser, coaxed him out of the store, placed him in handcuffs and into the police car, then drove away.

Suspect Cuts Through Rubber Seal and Crawls Inside Retail Store

A Stealth Monitoring security operator saw an individual approach a storefront window within a retail shopping center. He used a tool to remove rubber stripping from around the window frame and slung it to the side.

Our operator activated the on-site speaker warning and contacted police. The suspect ignored the audible warning.

The window dropped onto the ground and shattered into multiple pieces and shards. The perpetrator backed away and waited a few seconds before ducking under the window frame and into the store with his upper torso. The suspect pulled open a drawer that was within reach and grabbed some items.

A police cruiser drove up and two officers walked over to the busted window to investigate. Officers found the suspect and arrested him.

One of our operators saw an individual walk on the sidewalk in front of a shopping center. A few doors down, the individual was seen swinging his arm against the glass store front to break it. An accomplice stood by and watched.

Our operator contacted police. Officers quickly arrived and the suspects ran. Police pursued the perpetrators, caught them, and made an arrest.

A Stealth operator saw an individual wearing a black jacket and blue jeans walking along the sidewalk of a shopping center. During his midnight stroll, the individual used his knuckles to knock on the glass door of the shopping center’s stores. He then headed up the sidewalk for a bit, then turned and walked back.

The individual threw a large rock at the storefront attempting to gain entry. Our operator immediately called police.

The suspect crossed the parking lot, but he was intercepted by police and placed under arrest.

Shopping centers have unique layouts, a blend of tenants, a variety of demographics, different amounts of foot traffic and are in various types of neighbors including bus stops, liquor stores, parks and more. Proactive security solutions provide an innovative and cost-effective way to help deter unwelcomed behaviors.

Stealth’s proactive shopping center surveillance and live video monitoring solutions provide a way to actively watch activities occurring on your shopping center’s property in real time and in some cases, use voice-down communications. Sometimes all trespassers, loiters and other criminals need is to be warned that they are being watched and this is enough to deter them.

Our customized video surveillance solutions do not rely on motion sensors but use a combination of video analytics and human intelligence. These proactive solutions are typically more cost-effective than traditional security solutions – up to 25% to 60% less.

Contact us
to learn about our high-quality, highly effective security solutions for your shopping center today! 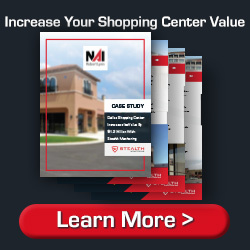