Skip to content
Home » Blog » What Can You Do to Fortify Office Building Security?

What Can You Do to Fortify Office Building Security?

Can you relate to this? The manager of an office building needed to find a security solution to stop vehicle damage in the parking lot, vandalism, trespassing, and break-ins. The security guard services didn’t work and became too expensive. The manager also tried installing an alarm-based system that failed to stop the crimes.

The manager contacted Stealth Monitoring for a customized video monitoring solution. It involved strategically placing cameras around the property to watch the roof, utility meters, access ladders, and back doors. They also implemented audio speakers that allowed the trained operators to alert any suspects trespassing on the office property.

The result? The company saved thousands of dollars per month between deterring property damage and not using security guards. The trained operators deterred crimes between using the speaker and contacting the police who arrested the suspects.

Bad news. Office theft is growing. In 2017, thieves stole $451 million worth of office equipment per the FBI’s U.S. Crime Record. The recovery rate of the stolen items is a measly 5.4 percent. Additionally, non-cash theft has soared from 10 percent in 2002 to an astonishing 21 percent in 2018, according to the Association of Certified Fraud Examiners (ACE). That’s just for starters. Office buildings struggle with these big problems.

A CNN survey says workplace theft is responsible for one-third of businesses failing. The problem is that anyone can steal from an office. Everyone from employees and security guards to housekeeping and building visitors. Theft rises whenever the economy is in a downturn as people struggle to make ends meet.

Workplace crime costs U.S. companies $50 billion per year according to CNBC. Employee theft is a larger problem than many realize. In just one year, it costs U.S. businesses an average of $1.13 million.

The ACE study on occupational fraud shows that it’s not just the newer employees who steal. Those who have been with the company longer steal twice as much as those with fewer than five years of tenure.

A recent article reveals an office building had to close for 10 days due to vandalism. The suspects had cut into the rubber that lined the building’s roof. It led to severe roof leaks from heavy rains. Clearing out the flood in the building and repairing the roof aren’t the only price the property manager will pay for as a result of vandalism. They could lose business from having to close for repairs.

The unsightly property can affect the company’s reputation and people may not feel as safe coming to the building. It can also increase insurance premiums.

Crime in Parking Lots and Garages

Parking lots and garages are hotbeds for crime. Over a four-year period, more than 10 percent of property crimes occurred in these areas as reported by the Bureau of Justice.

Moreover, parking areas appear as No. 3 — clocking in with a massive 24,208 incidents — on the FBI Crime Data Explorer list for location type of where the most violent crimes occurred in 2017. That translates into 1,400 attacks in parking areas every
day! That alone justifies the need for the right parking lot security solution.

The reason so many crimes occur in parking lots and garages is because companies design them without thinking about security. These areas present too many easy opportunities for suspects to commit a crime. Think about what’s in a parking lot. Vehicles with parts that sell for a lot of money and items people leave inside their cars.

When someone falls or gets hurt on the office property, the liability insurance coverage tends to pay for it. The coverage can take care of associated legal costs if the injured individual sues the property for damages. It’s hard to win the case when the company can’t prove who is truly responsible for the incident.

Office building managers don’t think about liability because they figure their insurance will handle it. The truth is that general liability insurance does not always cover the costs, or at least not all of it. Besides, the price of liability can end up being more than money.

The process for approving the liability claim and paying the company is not a quick one. Meanwhile, the company still needs repairs or replacements and will have to take it out of its cash flow. That’s why it’s critical to reduce liability.

The Growing Use of Video Surveillance

A survey from the American Management Association (AMA) and the ePolicy Institute has found that almost half of employers rely on video surveillance to deter theft and vandalism. Close to 80 percent of employers tell employees about video monitoring as an anti-theft tool. At 7 percent, very few use video to observe employees’ job performance.

Video monitoring is more than a crime deterrent. It involves posting cameras in and around an office building and then having someone watching the cameras. Otherwise, you can’t catch crime before it happens or while it happens. The other problem with some video surveillance services is the resolution of the cameras. If you can’t make out faces and other identifying information, then you’re wasting money.

On-site security guards are expensive and have many limitations including liability. They can only see so much of the property at once and may not be able to access some areas like the roof. Video monitoring can watch your entire office building and other hard-to-access areas while providing roof security.

One of the chief concerns for office building managers is privacy. Every state has its own privacy-related laws. In most cases, when you mount cameras in visible locations, you’ll protect yourself from the potential legal ramifications of using hidden cameras. Check with your state’s labor department or attorney for more information about workplace privacy laws.

The purpose of such laws is to protect citizens by limiting the way business can capture them on video and allowing the individual to have a reasonable expectation of privacy. For instance, California, New York, and Rhode Island say that video cameras are not allowed in changing rooms, bathrooms, and any place where a person may change clothes.

An office building has many public spaces such as the parking lot and garage and wide-open areas where people can roam. These areas can lead to criminal activity when the property does not implement proactive security measures such as live video monitoring and access control systems.

One of the best ways to dissuade criminal activity and prevent damage is by implementing remote video surveillance with a speaker and access control systems.

Watch this van video to see how a remote security operator recognized a van from previous incidents and called the police. Upon arriving on the property, the police arrested the suspects and towed the van.

In another scenario, a trespasser entered an office building. The trained security operator issued a warning that did not daunt the suspect. The operator called the police and continued monitoring the suspect’s movements until the police arrested him.

What should an office building include in its security solution? Buildings magazine recommends the following:

Today’s technology makes it possible for video security cameras to do more than deter crime, avert damage, and boost security. They can also limit risk and liability, increase compliance, and enhance marketing efforts. Insurance companies often offer discounts for office buildings that implement video monitoring because it reduces their risk of vandalism and other crimes.

The key to maximizing security is monitoring. You cannot be proactive and deter crime when no one watches the video cameras. You have a few options for monitoring your office building. One option is to use live monitoring at night and analytics monitoring during non-monitoring hours.

Another important factor in a successful monitoring program is recording. This gives you the proof you need to make your case. In talking to a vendor about this option, ask how long they retain the footage. Sometimes things come up much later after the incident.

Stealth Monitoring can design a customized video surveillance solution that works in real-time to catch events before they happen or while in progress. Using a combination of video analytics and human intelligence, trained security operators watch your property when there is any kind of activity, not just motion.

This proactive solution ensures your property has the highest level of security while reducing liability. They can be up to 60 percent more cost-effective than security guards. A well-implemented security program will keep your sensitive information and property secure while helping employees and visitors feel safer.

A customized program can cover indoor and outdoor areas and around the property including entries, loading docks, dumpsters, roofs, alleys, and parking areas. Remote video monitoring offers many benefits that can lead to a quick return on investment. To learn more about office building security, please contact us. 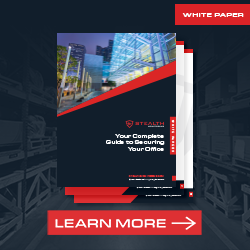 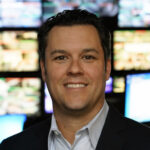 What Are the 4 Benefits of Visitor Management Technologies?