According to the National Insurance Crime Bureau (NICB), car thefts in the U.S. increased more than 16 percent in 2021 compared to 2019 and almost 30 percent more than in 2017. The numbers in some parts of the country are even higher than that. For example, Washington state saw an 88 percent increase in just the first quarter of 2022. With so many vehicles sitting outside and unattended, automotive dealerships have cause for concern.

In this Arrest of the Month video, we spotted a trespasser getting into a truck on her second late-night visit to a dealership. Her next visit was to jail.

A trespasser was seen walking around an auto dealership after hours. She left the property, but then returned later and was able to access a truck parked on the lot. One of our trained security professionals had been monitoring her movements and called police. Officers arrived moments later to find the subject still inside the vehicle. They directed her to exit the truck, placed her in handcuffs and escorted her from the property.

Tech-savvy thieves and organized crime rings are upping the security need for automotive dealerships. When valuable inventory is sitting out in the open, it’s left exposed to theft and damage. Protecting these assets is crucial.

Installing surveillance cameras can go a long way in helping to prevent crime. The mere sight of a camera can be enough to deter some criminals, as there is an increased chance they will get caught. To be really effective though, the security system should be proactive, meaning it is designed to identify and help stop crime before it happens.

Remote video monitoring uses a combination of video analytics and human intelligence. Trained security operators monitor analytics-based surveillance cameras that are strategically placed around the dealership. If the analytics detects suspicious activity, such as a trespasser getting into a vehicle on the lot after hours, it will alert a monitoring operator who can quickly evaluate the situation and act accordingly.

In the video above, our security professional spotted the trespasser on the lot. The first time she was on the property, she left on her own accord without incident. Our monitoring operator then saw her return later and access a truck. This action prompted our operator to call police.

Because police know we are watching a crime in progress, they typically elevate the priority level of our call which often means they arrive while the suspects are still there. In this case, officers were on the scene and able to make contact with the subject and end the situation before there was loss or damage.

Remote video monitoring is a cost-effective way – up to 60 percent less than the cost of a security guard – to help keep crime from damaging your business. If you would like more information about our proactive solution, contact us. 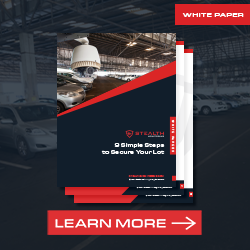 How to Prevent Building Supply Theft