Another big problem retailers face is shrink, or loss of inventory. It costs them 1.33 percent of sales. That sounds small, but when you put a dollar on it, it equals almost $47 billion! Additionally, shopping centers contend with loitering, vandalism, and theft.

A person who loiters is one who hangs around a shopping center, especially outside around the entrance with no plans to shop. This can deter shoppers, employees, and prospective tenants from entering the retail center. Either that, or they may go look for another way inside.

When they see a person lying or sitting around, they don’t know if the individual is dangerous. Loitering on property could cost you and your tenants’ money. Fewer people may shop or want to rent an empty space.

Another concern is the lack of parking lot and garage security. An estimated 24 percent of the theft was from motor vehicles.

The damage from commercial property vandalism costs more than the time and price of repairs. It also affects the property’s aesthetics and working conditions. Shoppers and employees may not feel comfortable going to a vandalized shopping center. Even after it’s cleaned up.

Vandalism can force the business to shut down. In one case, the vandals wrecked HVAC, refrigeration systems, CO2 tanks, and breaker boxes. The property had to close for repairs.

In 2011, The Dallas Morning News
published a graphic highlighting the worst crime spots around the city. The area around a Dallas shopping center made the No. 2 spot out of 27. No wonder the retail property, in a neighborhood ranked as one of the lowest income locations in America, had a problem where criminal activity occurred almost every day.

To battle the problem, the property’s management had spent almost $14,000 a month on 24/7 security guards. Even with on-site guards, problems with theft and property damage continued. The security guards did not justify the high monthly price tag that ate into profits.

The manager needed to find another solution. He met with a Stealth security consultant to outline the problems, needs, and property layout.

How the Dallas Retail Center Minimized the Crime Problem

After reviewing the security consultant’s report and discussion, the property installed $30k to $40k worth of equipment. Since the client supplemented the cameras with live video monitoring, he paid $2,000 per month for the monitoring. He swapped the full-time security guard service with a part-time, on-site security guard. This drastically cut the security guard bill.

The proactive security solution helped deter many crimes and reduced liability. Here are two examples from the same property.

Two suspects entered the Dallas shopping property and attempted to rob the donut shop. Stealth saw the suspects before they entered the shop and contacted the police. Law enforcement arrived and apprehended one suspect while the other ran away. Stealth used a pan-tilt-zoom camera to follow the fleeing suspect and kept the police apprised of his location until caught.

This hybrid solution of remote video monitoring with a security guard decreased property damage by a whopping 80 percent and radically lowered risk. By reducing the number of security guards, the property’s net operating income increased by $120,000, even with the addition of video monitoring.

Notice the solution includes more than just surveillance cameras. It also involves monitoring. Trained operators watch your cameras in an off-site location. It puts eyes on the entire shopping center’s property, something security guards can’t do. When something suspicious happens, they take action.

Remote video monitoring offers many benefits beyond deterring crime. It can reduce risk and liability. This, in turn, can lower your insurance premiums. Insurance companies reduce premiums because video surveillance provides proof that the business has taken steps to reduce risk.

Video cameras can help you find ways to improve productivity and customer service. You can see how traffic flows and how employees greet customers. The benefits together can lead to increased operational income.

You may have signs such as “Video cameras in use.” Signs help dissuade some criminals, but not all of them. Criminals know some businesses put up signs as a deterrent without having a single camera or even guard dogs. Every security layer makes a difference and this is one of the easiest steps you can take.

The next step in security is to install video cameras in strategic locations around the property including places where everyone will notice them. Then, decide whether you want to take a proactive or passive approach with the cameras. Passive, or reactive, involves cameras simply recording video for use after a crime or accident has occurred.

With the proactive option of remote video surveillance, people watch the cameras in real time and act when something looks dodgy. This helps to increase crime prevention especially if you incorporate an audio speaker. The operator can warn the suspects and send them scampering away. For those who continue to try to break the law, the operator can call the police, track the suspects’ movements, and keep the police apprised of their location.

Let your tenants know about the cameras and the monitoring. They will appreciate the extra step in security and can inform their employees to give them peace of mind. It can also lessen the chances of internal theft.

Employees know about the weakest security points on a property. It puts them in prime positions to steal and get away with it. That’s why you want to be upfront about video cameras processes and that people are watching them.

Hiring a trained security guard may sound like a better idea than video monitoring because the guard is on-site. However, the guard cannot see the entire property at once. Trained operators watching the cameras can. If something happens, the guard may not find out about it until too late.

Live video monitoring has advantages over security guards. Trained operators watch for unusual movement, often before crime or damage happens. If the situation warrants it, they call the authorities who typically arrive before the suspects leave the property or do any damage. Operators work in shifts, which ensures your retail center has fresh eyes on it.

Security guard training requirements vary by state. However, many of them don’t have the proper training. That’s why security guards can be a liability risk on top of the high price tag. Security guards are at as much risk of internal theft as employees are. They’ve been caught committing crimes. The people watching your cameras are off-site, thus they don’t build a relationship with employees. Video monitoring minimizes the risk of internal theft.

3. Can Bring in More Tenants and Shoppers

When you see a property filled with graffiti and loiterers, what do you think? If you’re like most people, it feels unsafe, dirty, and uncomfortable. This could compel people to drive right past the property without stopping. The more tenants and shoppers you have, the more money comes in and that brings up the next reason.

Remember that Dallas shopping center dealing with an onslaught of crime? That property’s value climbed by more than $1.2 million.

When prospective tenants see the care you put in security, they’re more likely to sign the contract and stay longer. The longer they stay, the greater the ROI as you won’t have the costs associated with store turnover. You won’t need to repaint an empty store or do any of the standard maintenance between tenants.

The nice thing about video surveillance is that it’s a visible amenity thanks to the cameras. Everyone who comes to the shopping center can feel safer in knowing you make security a priority.

For the fastest ROI, you’ll want to work with an experienced remote video monitoring company. They can customize a security design based on your needs and budget. They’ll also ensure you have the right cameras and services. Not everyone needs 24/7 monitoring as some companies do well with nighttime-only monitoring.

The market contains many cameras that don’t produce high-resolution videos. What’s the point of surveillance if the videos are blurry? A security consultant will make sure your equipment can identify faces and other information.

Would you like to learn more about retail center security? Pick up your free complete guide to securing your shopping center. Please feel free to contact us with your questions. 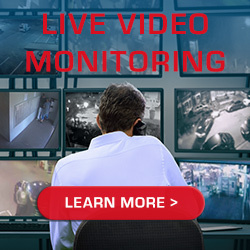 The Rise of Technology in the Transportation Industry