Violence such as verbal altercations, physical assaults and gun usage within a multifamily community threatens overall safety and security of residents, visitors and employees. Apartment owners and managers have an obligation to keep residents and employees safe.

Watching remotely during late-night hours, a trained, Stealth security operator witnessed a fight break out in the parking lot of an apartment community in Georgia. Three individuals swarmed around a car, physically interacting. Our operator immediately called local authorities, while keeping close watch on the unfolding altercation.

Authorities soon arrived. An individual involved in the altercation was wheeled away from the scene on a medical stretcher. Another involved individual was placed inside a police cruiser.

A little after 11 o’clock at night, one of our attentive monitoring operators noticed a verbal altercation between a man and woman in the parking lot of a Houston, Texas apartment community. The man parked his vehicle and exited it while the woman parked her car behind. She exited her vehicle and approached the man who was standing beside his vehicle. An argument ensued and our trained operator contacted police.

As our operator continued to monitor the scene, the dispute turned physical. The man returned to his vehicle and attempted to back out, but the woman’s car blocked him.

Officers arrived, questioned the man and woman, and apprehended the female suspect.

Stealth Proactively Reacts to Fight Atop a Multifamily Parking Garage

One of our expertly trained operators saw a white pickup truck ascend the ramp of a parking garage connected to a multifamily community. He parked and exited the truck, walked over to a parked car and attempted to open the driver’s side door.

The male drove his pickup truck down the garage’s ramp. He returned, gained access to the parked car, drove it over to a different location within the garage and parked it. He descended the ramp once again.

Police intercepted him as he attempted to drive his pickup truck out of the garage, handcuffed him and placed him inside a police car.

A savvy Stealth operator noticed a female and two males arguing in an apartment community hallway. On the upper level, a woman exited her apartment, gun-in-hand, to observe. The three people pushed each other and one of the males pointed a gun at the other male. Our operator immediately called police.

The man holding the gun grabbed the female then released her within a few seconds. It appeared another individual exited her apartment.

Still holding the gun, the man walked toward the community’s parking lot, followed by a female. The argument continued.

Police arrived as the man pointed the gun straight up and fired it several times into the air. Police officers handcuffed the man and walked him toward a police cruiser.

Residents and employees want to feel safe and secure. Knowing their community has a comprehensive, proactive plan in place against violence shows apartment owners and managers truly care.

The 2019 U.S. Crime Report that found assault accounted for 68.2% of violent crimes reported to law enforcement and in 27.6% of these assaults firearms were used. Live, remote video monitoring can help deter and protect your multifamily community from violence.

In the above examples, live, remote video monitoring by professionally trained Stealth security operators demonstrates how damage from altercations, physical assaults and improper gun usage was prevented by quick, effective intervention. Our calls to police register as “crimes in progress.” This often leads to quicker police response times compared to passive, unverified security systems and helps to prevent crime before violence, unwanted acts or more danger can take place.

Contact us
to create a customized, live monitoring system for your multifamily community that proactively helps decrease violence while saving 25% to 60% on your overall security costs. 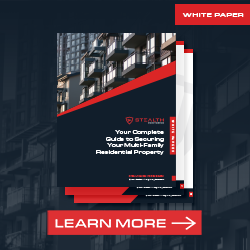