Auto dealerships have a unique set of security issues that they must balance with their business model. After all, many potential customers browse the lots filled with expensive inventory after hours. This, along with the recent surges in catalytic converter theft, creates a delicate security concern. Is that person on the lot after hours there for an attempted vehicle theft, vandalism, prowling, or just a simple interested buyer?

In this video, an observant Stealth security operator noticed a red SUV entering the lot to browse, followed by a purple pickup truck with a single car trailer a few minutes later. Since 8:30 a.m. falls within browsing hours, the operator continued observation.

The red SUV then stops at a red sports sedan on the corner of the lot, and the purple truck meets them there. After watching activity for a few moments, the security professional took action, activated on site speakers, and contacted local police. Expected activity for the site that day included pickup of a vehicle, but the scheduled time did not match what was observed on surveillance.

When officers arrived on scene minutes later, they determined that one of the perceived intruders was an employee of the dealership coming in to work some weekend hours. However, this employee had open warrants, which ultimately led to his arrest. The other intruder was allowed to leave.

While in this case, the actual reason for the potential security concern was unexpected, Stealth’s security operator followed security protocols for the site. When someone unexpected was on the lot, handling expensive outdoor inventory, police were contacted. Whether or not the intruder ultimately had a reason to be there, they did have existing warrants for their arrest, and were taken into custody.

From liability and security risk mitigation purposes such as the above case, or help deterring and responding to potential thefts, vandals, and trespassing issues- proactive security solutions like live video monitoring can make a huge difference.

Rather than waiting for something bad to happen, then having to scroll through hours of feeds to find an incident, advancements in technology and human intelligence combine to create a proactive, responsive security solution: live video monitoring.

With analytics-based cameras that watch for activity- not just simple movement- and trained security professionals who can recognize suspicious or unwanted behavior, action can be taken before there’s a theft or damages occur.

Live video verification of activity means police typically elevate the priority of a call, and often arrive on scene while suspects are still in the area.

If your automotive dealership is in search of a more effective security solution, contact us for details or to schedule a consultation about customized security options.  Texas Private Security License Number: B14187. 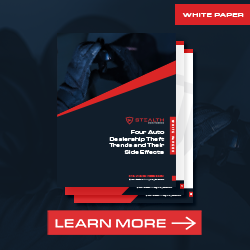 Virtual Security Is More Real Than You Think