Warehouse Space Continues to Soar in These Cities

If you thought 2017 was a banner year for warehouse construction in Dallas-Fort Worth, wait until you hear the latest. Just in the first quarter of 2019, construction of warehouse space
hit a record of 30.1 million square feet.

North Texas leads the U.S. in the highest numbers of current warehouse projects. CBRE confirmed 2017’s 26.8 million square feet of warehouse construction was a record, and 2019 construction has already surpassed it as reported by The Dallas Morning News.

Dallas-Fort Worth isn’t the only place in the U.S. experiencing a warehouse boom.

L.A. already boasts having more than 800 million square feet of space. With the industrial space vacancy rate in Los Angeles at a scant 1.7 percent, companies moved to Inland Empire because it has more space available.

East and Central Pennsylvania, consisting of Allentown and Philadelphia, have almost 20 million square feet of new warehouse construction in the works. Like Inland Empire, the area surged in warehouse space due to shrinking vacancies in other regions.

Surprisingly, Atlanta comes in sixth place in vacancy, with developers constructing 18 million square feet of warehouse space. The city hopes to bring in investments from major e-commerce companies and retailers. Net absorption comes in at an impressive 15 million square feet, second to Chicago.

Per CBRE, the need for these facilities is so high that only 7 percent of the warehouses were vacant in the fourth quarter of 2018. This is the lowest level since 2000.

However, some manufacturing growth and business activity slowed in December. This and other signs show a potential slowing of the U.S. economy. Nonetheless, this may be the relief that tenants need to not only find space but get it at more affordable rates.

Many industrial properties undergoing construction are at risk for theft and vandalism. Implementing a live video monitoring program can help prevent criminal activity while making the property more desirable for potential tenants. To learn more about remote video surveillance for warehouses and logistics facilities, please contact us. 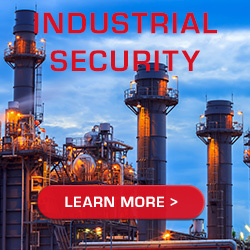 Shopping Center Loitering: Fight Outside of a Restaurant