Download Your Copy of The State of Crime and Its Effects on Logistics, Distribution, Warehousing, and Transportation Now.

If you’re in the transportation industry, chances are you are aware of just how costly cargo theft can be. In case you need more evidence, consider this: According to CargoNet, during the third quarter of 2020, the average value of each theft was more than $150,000. During the same timeframe, the value of all cargo that was stolen in North America was approximately $33.77 million.

Cargo thieves can generally be broken down into two categories:

Opportunists are just that – people who see an opportunity and act on it. They hotwire trucks or watch for ones that are left running on the dock. Some even steal a truck cab and then use it later to take a trailer.

Organized crime is much more involved. It often involves creating fake identities or businesses for the purpose of stealing or rerouting cargo. Their goal is to fool shippers into giving them the cargo instead of to the intended carrier.

In a year unlike any other, what problems, outside of theft, is the transportation industry dealing with?

Many distribution facilities and warehouses utilize security guards to help protect their inventory. However, this isn’t always the best solution. For one, there can be a trust issue. Guards often have access to important credentials and documents. How can you be sure they are doing things by the book? Are they leaving these papers lying around where anyone can get them? Are they doing something illegal with that information? Are they taking kickbacks from the criminals in exchange for looking in the other direction?

A second drawback is cost. Guards can be expensive. A security guard can only be in one part of the property at a time and is limited by only what they can see in front of them. A lot of warehouses and distribution facilities are expansive. To cover that much ground, you would likely need a team of guards. That can be cost-prohibitive to some, just on salary alone.

Some distribution centers and warehouses find themselves embroiled in liability cases. Many of these involve scams. For example, drivers claim their truck was damaged or they sustained bodily injury while at warehouse, when the truth is, the incident took place somewhere else.

During the first quarter of 2020, the number of cargo thefts soared by 50 percent over the previous year. Experts believe cargo theft fell on the list of priorities for businesses who became more concerned with health and safety. In addition, there was a surge in fictitious cargo pickup activity from organized crime rings.

Experts believe the increase in theft during the pandemic was caused by three things:

What’s the Best Solution for Securing the Supply Chain?

Securing the supply chain requires more than just protecting trucks on the move. It also demands securing the facility. Warehouses, logistics hubs, and distribution centers can benefit from a customized video monitoring solution. It can help deter crime and damage by taking action as soon as suspicious activity is spotted.

Using a combination of video analytics and human intelligence, trained security operators monitor surveillance cameras in real time. When they see something, they can act immediately.

Do you want to learn more about the state of crime and the latest trends in the transportation industry?

Download “The State of Crime and Its Effects on Logistics, Distribution, Warehousing, and Transportation” and learn how you can maximize security and your investment. 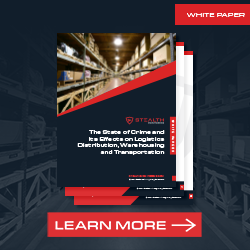 What Is Physical Security?