Skip to content
Home » Blog » Who Can Benefit from Mobile Video Surveillance?

Who Can Benefit from Mobile Video Surveillance?

You want to ensure your workplace is safe for your employees, vendors, and visitors. However, your site is a temporary or remote one. In this case, a full-blown deployment of live video monitoring may not be ideal.

It’s not a quick setup and uses cameras meant to be permanently placed or at least for a long time. Furthermore, they often require signing a long-term contract.

One approach some companies take is hiring security guards. They think that it makes a good temporary solution. Plus, they feel like they do not have any other options without investing in security equipment and cameras.

The Problem with Security Guards

Security guards are not always the best security investment because the cost multiplies with every guard added. Not only is it an expensive option, but also one that comes with liability risks. Here are the problems with using security guards.

You could shave the cost by only using security guards at night when no one is on your property. Still, guards can only see so much especially at night. It depends on the lighting of the property.

If a suspect shows up on the other side of the property away from the security guards, the guards won’t know something is about to happen. By the time they discover a problem, the suspect is long gone. Then, there’s no information to help catch the suspect.

When you hire security guards, you don’t always get someone who is like a lighter version of a police officer. The training for police officers is far more intense than the one for guards. In fact, some security guards may have little to no training. It depends on the location of your business because every state has its own rules for security guard licensing.

That said, you don’t know how a security guard will respond to a dangerous situation. They are still human and when they fear for their lives, they may flee instead of fight. Many guards simply do not have the knowledge and skills to match police officers. Their mistakes can lead to liability problems.

Guards can be a liability risk

Should a security guard follow through and do the job, it could lead to another problem. One in which the security guard becomes a liability risk. For instance, one family is suing the company that provided the security guards. The Dallas Morning News article
explains the police officers received a call to check out a problem at a store.

When they arrived, they assumed the guards had searched the suspect for weapons. It’s standard procedure for guards to disarm and search the suspect before calling the police. It turns out the guard missed a gun in the search. That gun killed one officer and injured another.

Lest you might think this is an unusual situation, it isn’t. Two wrongful death lawsuits in Nevada name a security company as the defendant. In an attempt to shoot the robber, the security guard shot and killed the employee.

Security guards can be held liable for other situations besides shootings and causing a death. The City of Montreal wants to hold security guards liable for $1.5 million in damages. They were patrolling a building next to the city hall on a very cold weekend in winter. It turned out a window was left open. This caused the pipes to freeze and break, flooding the municipal building.

The high price of security guards

A security guard’s salary depends on their experience, licensing, and training. Typically, they earn somewhere between $10 and $24 per hour. Those paid on the lower scale have less experience and training. They also most likely cannot carry a weapon. Another factor that can affect the cost are the hours they work. Those working the night shift tend to receive higher pay because of the increased risk.

To give you an idea of what it costs to have a security guard, one business posted guards 24/7. They paid $14,000 a month, which is $168,000 for the year. The company needed to find another security solution because paying for guards hurt their bottom-line. Fortunately, they found an alternative security solution. It costs 60 percent less than the security guard option.

A better alternative is mobile video surveillance for construction, industrial, and temporary sites. Stealth, for example, has a modular surveillance solution that’s designed for speedy deployment. Security specialists can mount the cameras on almost any pole or flat surface, such as the roof of a site management trailer. Unlike some camera systems, you have many options for mounting the modular solution cameras.

Construction sites and other properties can be tough to secure because of their constant change, low-lighting, and unreliable power. The modular solution can overcome these challenges. It’s a self-contained surveillance solution with an optional battery backup in case of a power outage.

You can scale the system up or down based on your current needs. The mobile camera solution works with wireless or hardwired internet.

Cameras alone make great crime deterrents, but not 100 percent. You can add an audio deterrent to the Igloo solution. This lets the person watching the cameras warn the suspects they are being watched.

These are the best places to use mobile video like Stealth’s Igloo Surveillance Solution.

The most successful construction companies put a high priority on security. The biggest reason is liability. Data from the Occupational Safety and Health Administration says that 21 percent of the worker fatalities in 2017 occurred in construction.

Moreover, the Bureau of Labor Statistics indicates 2017 had 198,100 injuries in construction. While that’s down from 2016, more than 500 injuries per day leaves a lot of room for improvement.

The second biggest reason for construction security is theft. An estimated $300 million to $1 billion of equipment is stolen every year per the National Equipment Register (NER). And recovery is slim at fewer than 25 percent making their way back to their owners.

Scrap metal theft is also growing and construction sites are one of the top places to find scrap metal. Stolen copper exceeds $1 billion every year says the Department of Energy. It’s not surprising when copper can sell for around $3 per pound. Additionally, there can be frequent and significant damage to existing equipment when thieves attempt to steal copper.

A construction company may have insurance on its equipment and used materials, but it often costs the company more than the price of the stolen equipment and materials. It can cause project delays, lead to unhappy clients, and affect the company’s reputation.

Video monitoring can also deter trespassing and crane climbers. Mobile video is the best for construction security because someone watching those cameras can spot situations on a site before they become a problem. Remote video monitoring can help construction companies stop crime, reduce liability, and reduce insurance premiums.

Thieves also target scrap yards for scrap metal and other valuable materials they can resell for good money. If you have cars in your recycling yard, those are also a big item for thieves. The National Highway Traffic Safety Administration says that experienced thieves can strip a car of its valuable parts in fewer than 30 minutes and sell them for two to four times the vehicle’s value.

Between the scrap metal and vehicles, a scrap yard is a treasure chest for thieves. If they manage to steal these items, then your bottom-line will take a huge hit. Mobile surveillance makes it possible to mount cameras in all the right places and deter crime. The mobility makes them easy to relocate as your site conditions change.

When trained operators watch your property, they can catch things before they happen. As soon as they see suspicious activity, they can issue an audio warning. If that doesn’t work, then they call the police and keep tracking the suspect’s movements.

In addition, we can provide video footage from all relevant cameras that can help with insurance claims and police investigations. You can also check in on your property through your mobile devices.

Warehouses and distribution centers hold thousands of dollars’ worth of assets. They may contain parts, supplies, and building equipment. These sites don’t always have many people around. Criminals like to attack places with little oversight. The warehouse can be a gold mine for theft and vandalism. Here’s a video of thieves tampering with a trailer at a warehouse and another of arsonists at a warehouse loading dock.

With people watching the warehouse through a video surveillance system, it can help prevent theft and vandalism. If the cameras alone don’t deter someone, then the trained operator can issue a warning through the speaker. If that’s not enough, then the operator calls the police while tracking the suspects. Often, the police arrive before the suspects depart.

If you have a remote or temporary site, adding mobile surveillance to your security arsenal will deliver the quickest ROI, help prevent damage, and reduce liability. Best of all, it costs 60 percent less of what it would cost to hire security guards while having eyes across your entire property.

Whether mobile surveillance is the best option or something else, contact us. We can work with your requirements to design a program that maximizes your security for a fraction of the cost of security guards. 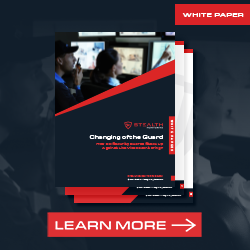